On October 19, 2016, the Centers for Disease Control released their annual Sexually Transmitted Disease Surveillance Report.1 According to the report, the three most prevalent STDs – chlamydia, gonorrhea, and syphilis – have regained popularity among the 15- to 24-year-old U.S. population. In fact, the number of diagnosed cases reported in 2015 among these diseases reached its highest number ever.

Because STDs can often be asymptomatic, the 1.9 million cases reported is undoubtedly a low figure. Many STDs go undiagnosed, leaving the infected individual, their partners and even their unborn children at risk. “The health outcomes of syphilis – miscarriage, stillbirth, blindness or stroke – can be devastating,” states Dr. Gail Bolan, Director of CDC’s Division of STD Prevention. Ironically, chlamydia, gonorrhea, and syphilis are all curable with simple antibiotics, but left untreated can result in “irreversible health consequences, including infertility, chronic pain and increased risk for HIV.”2

10-20% of women infected with chlamydia and gonorrhea will develop PID, which can lead to reproductive morbidity. Syphilis cases increased more than 27% in women from 2014 to 2015 and infections transmitted from pregnant women to their babies increased 6%. Congenital syphilis can result in the death of an unborn child, or in deformities, anemia, jaundice or nerve disorders post-delivery. Dr. Bolan states that “every pregnant woman should be tested for syphilis.”

Gay and Bisexual Men Most at Risk

“Young people and gay and bisexual men continue to face the greatest risk of becoming infected with an STD,” according to the CDC’s release. Men who have sex with men accounted for the majority of new gonorrhea and syphilis cases. It is recommended that “sexually active gay and bisexual men should be tested for syphilis at least once a year.” Those of lower economic status were cited as most at risk for poor health outcomes in this group.

Nearly two-thirds of all new chlamydia diagnoses and half of gonorrhea diagnoses fell into the 15- to 24-year-old range. The CDC suggests that the increase may be due to reduced access to screening and treatment. 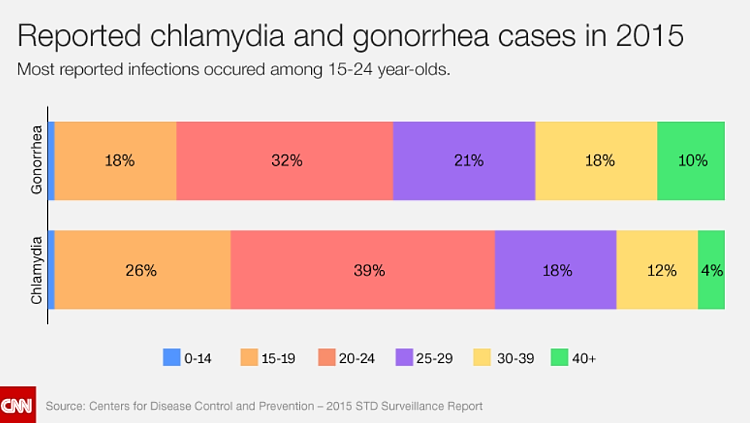 What does this mean for you as a sexually active young adult? First, know the symptoms of STDs. Being aware of the potential dangers of STDs and how to prevent them is crucial to your current sexual and future reproductive health. And if you’re not 100% positive that you do not have an STD, get tested.

Did you know that CompassCare offers free STD testing and treatment?

What to expect at your visit.