STDs are infections spread by sexual contact with skin, genitals, mouth, rectum, or body fluids. Although some STDs can be treated, others cannot. People with an STD may not know they have it. 1 According to the Centers for Disease Control, in the United States, 1 out of 4 women between the ages of 14 and 19 is infected with at least one STD.

Sexually Transmitted Diseases (STD’s) pose a serious risk to future reproductive and overall health, especially if left untreated. People who have an STD are at least 2 to 5 times more likely to contract HIV, the virus which leads to AIDS. 2

More than 1 in 3 female teens who have had sex have an STD. 3 As your number of partners and sexual encounters increases, your risk of contracting an STD increases dramatically.

What is Your STD Risk Ratio? 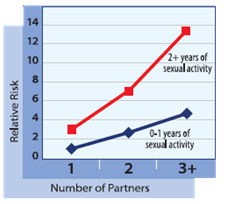 Most STD’s go undiagnosed because symptoms are not recognized or are very mild. An infected individual can share an STD with their partner before ever realizing they have one. Because they are often asymptomatic, it’s important to be tested. CompassCare provides STD testing and treatment. Schedule a free consultation.

Definition:
A common sexually transmitted disease caused by the bacterium, Chlamydia trachomatis, which can damage a woman’s reproductive organs.

Chlamydia is the most prevelant STD.  Use of hormonal contraceptives increases your risk of contracting Chlamydia. 75% of women who are infected with Chlamydia do not know they have it, because they have NO SYMPTOMS.

Symptoms of Chlamydia in women include:

Symptoms of Chlamydia in
men include:

If left untreated:
Can develop into a “silent” infection, impacting a woman’s future ability to have children.

Definition:
A sexually transmitted disease caused by Neisseria gonorrhoeae, a bacterium that can grow and multiply easily in the warm, moist areas of the reproductive tract in women and men.

Many women and men have NO SYMPTOMS of Gonorrhea.
Symptoms can take up to 30 days to appear.

Symptoms of Gonorrhea in women include:

Symptoms of Gonorrhea in men include:

Risks:
Increases a woman’s susceptibility to HIV. Can be transmitted to infants during birth, causing blindness, joint and blood infections.

If left untreated:
Can develop into PID and infertility in both men and women.

Symptoms:
Can include abnormal vaginal discharge with an unpleasant odor, pain, itching or burning.

Risks:
Increases a woman’s susceptibility to other STDs.

If left untreated:
Can develop into PID, resulting in damage to the fallopian tubes and infertility.

Risks:
Can cause jaundice; is easily spread through fecal-oral contact.

If left untreated:
Is the leading cause of liver cancer.

Symptoms: (Image)
Can include small red bumps or tiny white blisters that become ulcers and can be found on the genitals, buttocks, anus or thighs; sometimes flu-like symptoms.

Risks:
Causes recurrent, painful sores and can be transmitted to infants during birth.

If left untreated:
Can increase a woman’s chances of contracting HIV.

Risks:
Can be symptomless for 10 years or more, but still transmitted to sexual partners or infant during childbirth.

If left untreated:
Can progress into AIDS and death.

Symptoms: (image)
Can include genital warts, sometimes in the mouth or throat, genital itching or discomfort, bleeding with intercourse.

Risks:
Can be spread through contact with the infected area regardless of whether symptoms are present.

Symptoms: (image)
Can include one or more painless, open sores called chancres.

Risks:
Can be spread when sores are present anywhere on the body, including the anus and mouth; sores can last 3-6 weeks and leave scars.

If left untreated:
Can damage internal organs, resulting in paralysis, blindness, dementia and even death.

Symptoms of Trichomoniasis in Women include:

Symptoms of Trichomoniasis in Men include:

Risks:
Can increase the probability of acquiring HIV.

If left untreated:
Can result in premature or low birth-weight babies.

Do not have sex during treatment of an STD. Notify all sex partners that you have an STD so they can be tested and treated. You should be re-tested for STDs 3-4 months after finishing treatment.

1 The American College of Obstetricians and Gynecologists (2011). “How to prevent sexually transmitted diseases.” FAQ009.