How Do Contraceptives Work?

Contraceptives are methods of preventing  or ending pregnancy, also referred to as “birth control,” and work in three ways: preventing fertilization, preventing implantation, and altering a woman’s body chemistry to prevent ovulation.

Fertilization is the union of a man’s sperm and woman’s egg. Some contraceptives create a physical barrier to block sperm from reaching an egg. Male and female condoms and the diaphragm are examples.

2. Make the Uterus Hostile to Implantation1

Contraceptives can attempt to prevent a baby from implanting in the mother’s uterus after fertilization by creating a hostile environment. Intra-uterine Devices (IUDs) and chemical methods are in this category.

Typically referred to as “hormonal” contraceptives, synthetic steroids like the pill mimic hormones to prevent pregnancy by changing a woman’s body chemistry, which has three impacts:

Chemical contraceptives include the oral birth control pill, Depo-Provera injection, patch, and implant. Chemical methods provide no protection against STDs and can actually increase your risk of getting an STD by making your reproductive tract more vulnerable to infection (see Birth Control and STDs).

Is There Really Such a Thing as Safe Sex?

Despite the advocacy of condom use to reduce your risk of acquiring an STD, the Centers for Disease Control (CDC) states, “there’s no absolute guarantee even when you use a condom”.  Even the CDC does not embrace the term safe sex, calling it “less risky” sex instead.3

What they also fail to mention is what “risky” really means.  As determined by the National Institutes of Health, “overall, the condom’s effectiveness at preventing HIV transmission is estimated to be 87%, but it may vary between 60% and 96%”.4 These numbers don’t even factor in the element of exposure over time.

In an International Planned Parenthood Federation Medical Bulletin, author Willard Cates states that, “the risk of contracting AIDS during so-called ‘protected sex’ approaches 100 percent as the number of episodes of sexual intercourse increases.”  According to the graph submitted by Cates below, you will inevitably, eventually contract HIV/AIDS when having sex with an infected partner, even with perfect condom use. 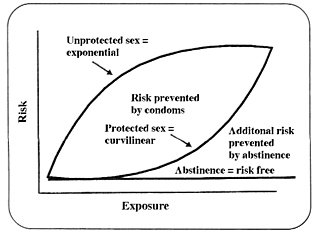 Graph shows Risk (of contracting HIV) vs. Exposure (the number of sexual encounters).

HIV is one of over 25 sexually transmitted infections that can have a serious impact on your future reproductive and overall health, especially if left untreated.  Pregnant women are particularly at risk.  The only way to avoid contracting a potentially deadly infection is to abstain from sexual activities with anyone who may be carrying an infection.

Find out more about common STDs and their related conditions on the Center for Disease Control and Prevention’s website.

Concerned about your sexual or reproductive health? Schedule your free consultation with CompassCare.

1 Methods in categories 2 and 3 can be ‘abortifacient,’ meaning that they end the life of a developing baby.

2 Methods in categories 2 and 3 can be ‘abortifacient,’ meaning that they end the life of a developing baby.