What is Laminaria, How is It Used in Abortion, and Are There Risks ? 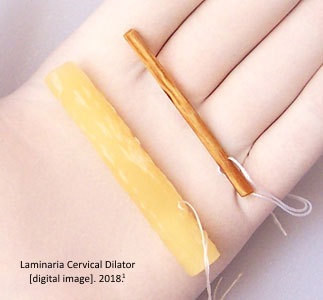 What it is Laminaria?

Laminaria is a kind of seaweed that can be sterilized, rolled and dried to create a thin stick or “tent” that can be inserted into the cervix to force dilation. There is a synthetic version of currently available in the United States called Dilapan-STM Also known as osmotic dilators, both are commonly used as a preparational step for second-trimester abortions.

How Does Laminaria Work?

A laminaria tent is a small rod of dehydrated seaweed that when inserted in the cervix, rehydrates, absorbing the water from the surrounding tissue in the woman’s body. Laminaria expands up to ten times its original size, slowly opening the cervix, and when removed, creates easier access to the uterus. Steady pressure placed on the cervix by the tent also promotes the release of endogenous prostaglandins, causing contractions2 which readies the body for expulsion of the fetus.

When is Laminaria Used?

Laminaria is used mainly in second-trimester abortions (D&E). It is sometimes used in first-trimester abortions; however, compared to laminaria tents, other forms of cervical dilation are “associated with less discomfort and [are] preferred by women.”3 Depending on a woman’s health history, laminaria may not be the most effective method of cervical dilation, and each case must be considered independently. “Previous cesarean sections, cervical procedures and primigravidity [first pregnancy] were found to be risk factors for failure to achieve adequate cervical dilation after a single set of laminaria.”4

According to the University of California & Society for Family Planning, “No clear guideline currently exists for best practices involving cervical preparation for women planning dilation and evacuation at 20 weeks and greater.”5

What Happens During the Laminaria Insertion Procedure?

During the laminaria insertion procedure, the patient is awake and positioned for a pelvic exam. The practitioner will use a speculum to open the vagina. He or she will then clean the cervix and apply a numbing medication. Once this is done, the laminaria tent is inserted into the cervix. After the procedure, the woman should rest for a few minutes, and can dress and go home when she feels able. The entire procedure takes about 10 minutes. Cramping and spotting may occur following the insertion.6 Patients should return within 24 hours.

Women who have a laminaria tent placed must return for their follow up visit. Laminaria should not be left in place for over 24 hours due to increased risk of infection and other complications. Patients should never attempt to remove the tent on their own or pull the string.

Sometimes more than one laminaria tent is used to obtain the desired dilation, and “additional sets over 1–2 days may be needed in challenging cases.”7 No studies currently address whether using laminaria over the course of multiple days poses greater risk of infection.8

What are the Risks Associated with Laminaria Use?

According to WebMD, “The use of laminaria [is] LIKELY UNSAFE when used to induce labor. It can cause serious side effects for both mother and child, including infection, rupture of the cervix, and infant death.”9 One study published in the Rocky Mountain Medical Journal showed that 1 in every 14 of women endured complications from laminaria use,10 and a study by the Swedish Association of Midwives stated: “Complications in the use of laminaria include difficulty of tent removal, cramps, and menstruation-like symptoms in 8-9% of patients.”11

Risks during the insertion procedure include:

Risks after the procedure include:

Once the uterus is exposed to outside elements by the dilated cervix, the risk for infection and miscarriage increase significantly.18 According to the insert for Dilateria, a brand name of laminaria, if a patient changes her mind after the laminaria tent is in place, she should be advised that the “long-term effects on the pregnancy and the fetus are unknown. Fetal and maternal well-being in this situation cannot be assured.”19

If you’re considering a second-trimester abortion and want to know more about your abortion options, schedule a free consultation with us today. Let CompassCare’s professional, caring nurses help you make the right choice regarding your body and your future.