Currently, 42 states prohibit abortions after a specified point in pregnancy. 1 That point is usually determined by “fetal viability,” or the age at which a fetus is able to survive outside of the womb. In New York State, abortions are prohibited after 24 weeks gestation; however, a new study by The New England Journal of Medicine (NEJM)2 found that with medical intervention, a healthy fetus is viable at 22 weeks.

The NEJM reviewed almost 5,000 premature births ranging from 22 to 24 weeks gestation and found that with immediate medical care, 22-week-old babies can and do survive. However, of the 24 hospitals who participated in the study, only 22% provided lifesaving treatment to babies at 22 weeks, compared to 72% and 97% at 23 and 24 weeks respectively. Perhaps New York laws on standard fetal viability need to be adjusted to reflect the improved pre-term lifesaving technology.

According to NYS Public Health Law3, when an abortion is performed at just 20 weeks, a second physician must be present in case of a live birth. If the abortion fails, “such child shall be accorded immediate legal protection under the laws of the state of New York…” In other words, at just 20 weeks outside of the womb, NYS gives a child legal rights as a person (i.e. the right to lifesaving medical intervention), but up to 24 weeks inside the womb, it does not.

Dr. Edward Bell, a pediatrics professor at the University of Iowa, considers 22 weeks a new marker for viability. In an interview with the New York Times4, Dr. Bell sated, “we would say that these babies deserve a chance.”

Make an educated choice about your pregnancy. If you’re looking for unbiased information in a professional atmosphere where you can make a pressure-free, well-informed decision, schedule a free appointment with us today.

1 Guttmacher Institute. (May 1, 2015). State Policies in Brief: An Overview of Abortion Laws. 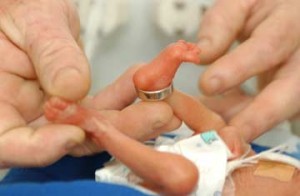