The Suggested Advantage of IUDs: Have the Risks Changed or Just Our Perception?

In an attempt to “curb teen pregnancy,”1 Golisano Children’s Hospital recently launched a campaign to promote the benefits of IUDs (intrauterine devices) over other forms of birth control.

IUDs are T-shaped plastic devices with a string attached, and come in two types: hormonal and copper. Neither of the two types of IUDs prevent ovulation. Instead, they deter sperm from reaching the unfertilized egg. Copper IUDs do this by releasing a small amount of copper into the uterus, which is believed to immobilize the sperm. Hormonal IUDs release a small amount of progestin, similar to progestin-only birth control pills. This causes the cervical mucus to thicken, making it difficult for sperm to pass. It also causes the uterine lining to thin, creating an uninhabitable environment for a fertilized egg, thus forcing it to be aborted prematurely.

According to Dr. Greenberg, an adolescent medicine specialist at the hospital, “Today’s [IUDs] are safe, effective, invisible, and can be easily removed with no lingering effects when you decide to become pregnant.” Dr. Aligne of the Hoekelman Center goes on to say, “There’s been a lot of research about how these devices are safe for teens. But some myths from several decades ago persist, and even some doctors don’t have all the updated information.”2 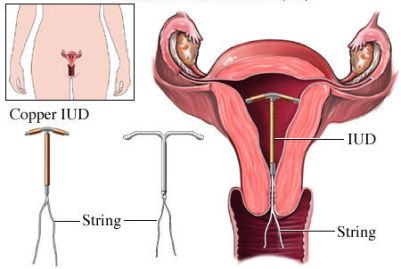 However, a recent study (Sept. 2014) published by the Journal of Research in Medical Sciences3 continues to confirm that IUDs are associated with an increased risk (OR=4.39) of ectopic pregnancy. The fetal mortality rate for an ectopic pregnancy is 100%, and although available treatment methods have improved, the negative risk to future fertility is still very much a factor. Having a single ectopic pregnancy significantly lowers a women’s chances of becoming pregnant again (up to 33%),4 and also increases her risk of having additional ectopic pregnancies.

If you’re thinking about an IUD, talk to your doctor about the risks of ectopic pregnancy. At CompassCare, we believe that the best decision is an informed decision. Our nurses are here to answer your questions about pregnancy and sexual health.